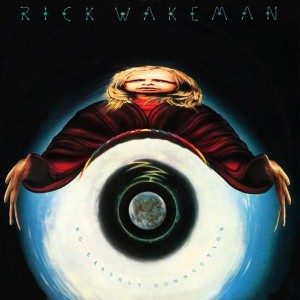 I’ve had a long-time interest in the art of the record album cover (and cd covers, etc.).  I’ve got quite a few books on the history of album covers, showcasing everything from the minimalist designs of ECM records to the psychedelic era of the 60’s. In all these books, however, some worthy examples of artistic covers get left out.  Undercurrent, which I talked about in a previous post is one, as is No Earthly Connection, a 1976 solo album by Yes keyboardist Rick Wakeman.

Wakeman was in his robes and platform boots period around this time, and (to be honest) I’ve never warmed up to his solo outings that I’ve heard – though I like his work with Yes quite a bit. I was recently reading that he’s released over 100 solo albums, though, so there’s probably something out there that I’d like (might take me a few years to find it, though…)

The thought and spirit of playfulness that went into the design of No Earthly Connection is to be commended as it was unique and interactive.  It created a way of looking at a cover in a new, different way (which is what art does, doesn’t it – causes us to look at things in new and different ways?)  As the Wikipedia entry states: “The original LP release contained a small square sheet of reflective plastic that could be curved into a cylinder, which when placed on the front cover allowed the viewer to see the cover drawing undistorted and with a 3D-like effect. A barely noticeable thin colourful arc on the cover (see picture) appeared then as a rainbow keyboard about to be played by Wakeman’s hands, in consonance with the album’s theme of a creation myth based on music.”

Though I don’t have a copy of the original record, thanks to the wonder of the Internet, I found a picture of what it looks like when set up properly:

Of course on the inner sleeve he’s about to do a belly-flop out of the sky onto Stonehenge, so you can take Wakeman’s art intentions with however many grains of salt as you wish…

Postscript: Not long after this album, Yes was due to release a new recording.  Rick Wakeman had become something of an art critic by then, as this passage (yes, once again from Wikipedia) relates: “The original album title was to be Yes Tor, referring to a geological formation in southern England. The photographs taken by Hipgnosis for the album cover were seen as so unimpressive that Rick Wakeman, in frustration, threw a tomato at the pictures. The cover and title were adjusted accordingly.” [The new title was Tormato]

(Thanks to my friend Dave, master of all things creative, for mentioning the “No Earthly Connection” album cover to me. Check out his website for an art dose.)