Thinking of how we first experience and interact with music has me thinking of the first music I owned in the various formats of music that have existed in in my lifetime.

The first record album I ever owned was John Denver’s “Windsong.” It was 1975 and I was a 7-year-old devoted watcher of Jacques Cousteau’s “Undersea World” t.v. specials. Denver had written a song called “Calypso” (named after Cousteau’s ship) and my parents bought the album for my birthday.  I had a toy record player (red and white plastic, if memory serves) which didn’t help the record’s longevity, nor did its home, strewn on the floor with comic books and some singles like the Davey Crockett song (“Davey, Davey Crockett, king of the wild frontier!”).  I still have that “Windsong” record, complete with all the scratches and pops it acquired. Listening to it can still transport me back to that cool, tree-shaded bedroom on hot 1970’s Florida afternoons.

The first record album I ever bought was The Beatles’ 1967-1970 collection (the “blue album”).  My parents had a Beatles compilation called “A Collection of Beatles Oldies (But Goldies!)” which had “Yesterday” on it, as that was the song by the band that they most liked.  The back cover of the album had a cool, intriguing, moody photo of the band in a smoky room, with slanting sunbeams, some marble statue-like things, an ashtray, and some strange acorn-like things on the table. It seemed like a candid shot and I used to wonder where they were and the circumstances of the photo. It must have been soon after that that I bought “the blue album” with saved up money at Sam Goody’s record store in New York City.  We didn’t take that many trips into “the big city” from small town New York, so it was exciting to be going to a big record store there.  I had that double record for years and years (complete with a green marker blotch on the top right corner that I somehow got on it by mistake.)  I eventually sold it when I was a college student to a long-haired heavy metal guitarist who was studying microbiology. At the time, I was getting rid of lots of vinyl records because CD’s were the relatively new, cool thing. I wish I still had that record, on the original Apple Records label…or at least that I would have charged more for it.

I also had an 8-track player for a couple of years.  The only 8-track I ever bought was AC/DC’s “Back in Black.” Introduced to hard rock and heavy metal around 7th or 8th grade, my friends and I would congregate in the school parking lot during recess on the cold autumn days with a boom box and Ozzy Osbourne’s “Diary of a Madman” & “Blizzard of Oz” cassettes and AC/DC’s “Back in Black” and “Highway to Hell“.  There wasn’t a lot of of physical exercise in those recesses…just a lot of of standing around, covertly watching the girls and trying to look cool. 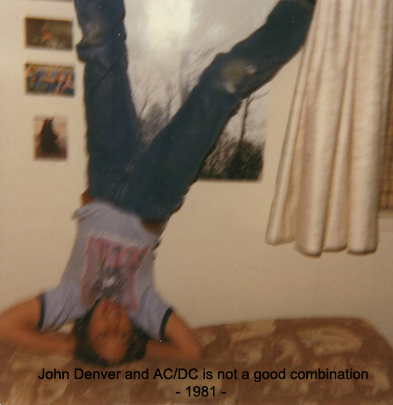 My first cassette tape…I’m not sure what it was, but it may have been The Eagles’ “Greatest Hits 1971-1975” or Jackson Browne’s “Running on Empty“.  These were cassettes that lived in the stereo of my first car and are very much a part of my teenage years.

First CD was Neil Young’s “Decade“. I had the cassette version first and remember purposely waiting to buy “Decade” on CD as my first CD (even though I knew I was getting a CD player for a few months before I actually got one.)  I wanted that first CD to be meaningful and not just anything. I wanted it to be significant.  “Decade” was an important album, both to me and critically, so it met that criteria.  There’s so much on “Decade” and it has a feeling like an artifact, an archive – a special document of, well, 10 years of recording history. From “Heart of Gold” to “Deep Forbidden Lake” to “Tired Eyes” to “Like a Hurricane” there’s so much to grasp onto, different styles, always with an integrity and depth, with some mystery thrown in.  The album cover art, with its desert hippie christ-like imagery and the handwritten liner notes added to the overall effect. All heady stuff for my teenage mind.

So, where are we now in 2012?  Music is more of transient thing in culture, the various computer formats composed of 1’s and 0’s.  I’m not a luddite- I love the portability and flexibility of digital music. But there seems to be less “meaning” associated with it now. So, we’ll skip my first mp3, because I have no idea what it was. Computer files are, by definition, less tangible and so we have less connection to them.  They don’t really stand as objects themselves – artifacts (and sometimes, pieces of art if they’re made well) we can form attachments with.  I guess that’s why vinyl records have made a comeback of sorts over the last few years. But that’s another subject entirely!