From the website Genesis News, comes the below story of the photo adorning the new “Genesis Revisited II” album by Steve Hackett. You’ll recall that Hackett was Genesis’ guitarist from 1971 to 1977 – their “prog” heyday (Peter Gabriel dressed as a flower or wearing a fox’s head, Phil Collins with long hair and a beard, etc.).  In the mid 90’s Hackett re-recorded some Genesis songs (with mediocre album art).  This is his second homage to his old band, featuring a more successful graphical vision: 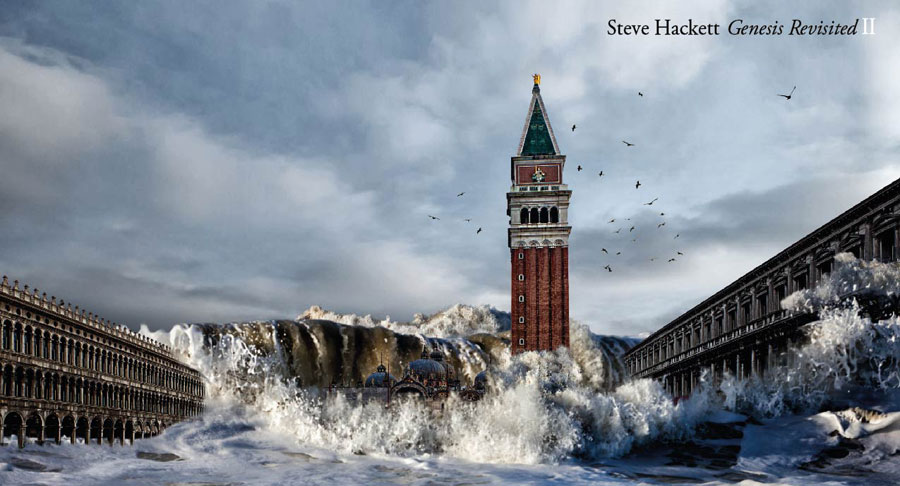 “The idea for it came from Angela and Maurizio Vicedomini who are also responsible for Genesis: In Our Flight Of Fancy. Let them tell us how they conceived of this idea:

‘One morning in Venice, around 9:30, we entered the Piazza S. Marco from the west with the gaps suggestive of side porches and the bell tower right in front of us. Looking down we realized that there was no living soul around us. Not a single person in the place or in the arcades. This initial moment persisted for almost ten long minutes after which we heard the first hurried steps moving behind our shoulders breaking the surreal silence. We took some photos that express only part of the feelings of those first minutes. A long pool of water on the pavement of the square gave the impression that there had been a flood and that with the water had dispersed the people away from the square. With this poignant thought and encouragement from Steve and Jo [Hackett and his wife] to search for something “dramatic and powerful” we developed the idea to create a scene that would justify the empty square. The following weekend we left for Sylt in search of a wave that could fit in the context of Piazza S. Marco and play as experienced by our mind.’

One of the things I like about this image is that it reminds me of a Hipgnosis record cover (Hipgnosis did most of those surreal Pink Floyd covers, as well as many others.)

It also reminds me of the technique used for Jackson Browne’s 1974 “Late For the Sky” cover art, in the sense that two photos were combined to make one (in Browne’s case, the sky image was combined with the car and apartment image).

The Hackett album cover is actually not that far-fetched, as the Piazza is not very far above sea level and has been known to flood (albeit in a much less dramatic fashion). Here’s a couple of views of the Piazza – dry and occupied by tourists, and flooded in 2007 (both pics courtesy of wikipedia):

And Sylt, from whence the wave picture comes – where is it? Turns out Sylt is the northernmost island of Germany. Exposed to the North Sea, it’s known for it’s storm waves and tides. So, a good candidate for a photographer seeking dramatic wave action.