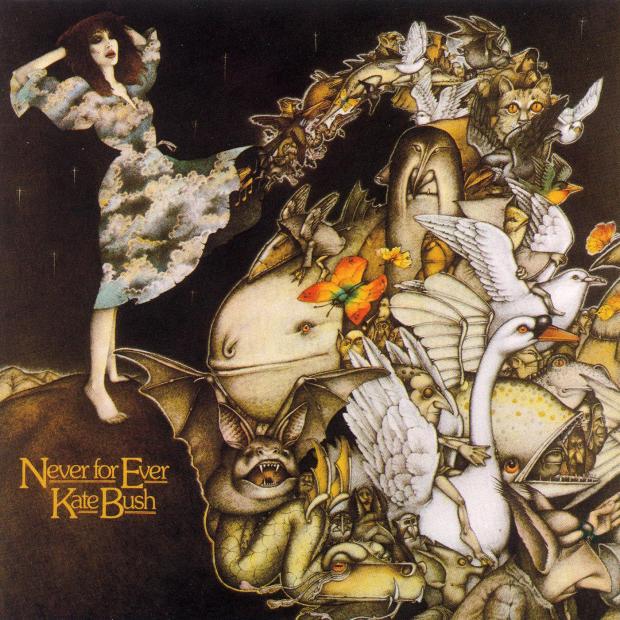 “A lot of people think it’s hilarious that all the ideas are coming out from under my skirt. But the good and bad things pour out of me in the form of music. It’s terrible, it comes out like diarrhoea! And it’s to hint that so much of it comes from a sexual need, from inside me, though it could also be from my stomach, my side . . . excretions. We had to be careful with the title because of all that, there was my skirt blowing about, but there couldn’t be anything about ‘wind’ in it or that would make the whole album one big fart.”
Kate Bush, quoted in Sounds magazine, August 30, 1980

Some record album covers translate okay to a smaller size – whether it be a CD booklet or a computer thumbnail image. Others, however, have rich detail which gets lost when the image is reduced.  Kate Bush’s 1980 album “Never For Ever” is one such album.

Painted by artist Nick Price, an advertising and children’s book illustrator who had previously provided the cover art for Bush’s 1979 Tour program, it features a myriad of fantastical creatures flying out from under her windblown skirt.  Symbolizing dark and light, a fang-baring bat and a swan are the most predominant. Bush described the cover as “an intricate journey of our emotions: inside gets outside, as we flood people and things with our desires and problems. These black and white thoughts, these bats and doves, freeze-framed in flight, swoop into the album and out of your hi-fis. Then it’s for you to bring them to life.” (Kate Bush Club newsletter, Sept. 1980)

Bush gave Price some direction (“She gave me a specific brief. Light and dark creatures coming out from under her skirt. I think the meaning is unequivocal, but I did ask her at the time. She just gave a big grin!”) and modeled for the image.

He was, however, able to apply his own style and vision.  It was a vision very much in sync with Bush’s psyche, echoing artists whose work she was drawn to.  Renaissance painter Pietar Breughal was one. When asked in a 1985 Melody Maker interview which artist she would most want to be, she stated “I would want to be Breughal, definitely. His work is so real, and yet depicted in a fantastic way. It’s so beautiful and elemental. And his faces are so haunting.” Another was late 1800’s/early 1900’s illustrator Arthur Rackham, whose illustrations she praised in another issue of the KBC newsletter (1979). The woman in his “Undine in the Wind” is strikingly similar to the figure of Kate Bush on the cover of “Never For Ever” (even to the point where both figures are standing on their toes).  Price’s work also shared commonalities with paintings by fifteenth and sixteenth century artist Hieronymous Bosch, in style, use of colour and dream/nightmare subject matter.

elative tameness of Price’s cover, in comparison to Bosch particularly, some were unsettled by the image.  When the CD was released in Japan, record company executives there felt the cover was too risqué.  Instead, it was modified to show only an enlargement of a section of the original picture.

Price would go on to create the front and back cover artwork for Bush’s single-only song “December Will Be Magic Again”, as well as the back cover swan image for the “Sat In Your Lap”/”Lord of the Reedy River” single 2 years later.  His cover for mandolinist David Grisman’s 1980 album “Mondo Mando” looks like a scene from the same painting as Never For Ever, though he hasn’t done many (if any) other album covers since.  Price is still active as an artist and has been working on, among other things, a children’s animated tv show called “Dr. Snuggles.”

Carrying the theme of the front cover illustration throughout the rest of the package, the back cover shows Bush taking flight as black vampire bats, and the French picture sleeve of the “Breathing” 7” vinyl single also shows her as a bat. Side A of the label of the original vinyl release portrays her as a white swan. This concept was furthered in videos for two of the songs – she appears as a white swan in “Delius” and as a dual persona in “Babooshka” (both shown, along with a rather regretful interview, on a TV show hosted by the band Dr. Hook in 1980.)

Just as the cover symbolizes the many aspects and emotions of life, from the dark to the light, the title of the album, “Never For Ever” conveys the idea that this jumble and chaos is all fleeting, that nothing lasts forever: “I’ve called it this because I’ve tried to make it reflective of all that happens to you and me. Life, love, hate, we, are all transient. All things pass, neither good or evil lasts. So we must tell our hearts that it is “never for ever,” and be happy that it’s like that!” (KBC newsletter, 1980)

Some trivia:
For those interested in scavenger hunts, mysteries, hidden clues and the like, every Kate Bush album has had a hidden “KT” symbol in its artwork somewhere (an obscure reference to her brief pre-first album band The KT Bush Band, and also a Knights Templars symbol). On “Never For Ever”, it’s on the stem of a rose on the inside cover of the vinyl album gatefold.