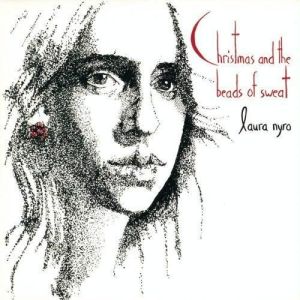 For somebody who used to wear Christmas ornaments as earrings, it’s surprising that Laura Nyro never released a Christmas album.  Oh, she did release an album with ‘Christmas’ in the title, of course.  But, you have to wonder how Columbia Records and the record buying public reacted back in 1970 when Nyro presented them with her latest album, Christmas and the Beads of Sweat.

To be released in November of that year, just before the holiday season, they were probably hoping for, well, for a holiday album.  The rising star’s most recent work, the challenging New York Tendaberry, had been a critical favorite, and a hot seller. Previously, she’d issued the more accessible (but no less creative) Eli and the Thirteenth Confession,  and her songs  were being covered by artists such as Blood, Sweat and Tears and Barbara Streisand.

Now here was a collection that, from the title at least,  sounded like it might be a radio-friendly holiday album…though there was that troubling “beads of sweat” in the phrase. As it turned out, “Christmas in My Soul” is the only holiday-centered song on the collection, and its account of the “heartlessness that darkens [her] soul” is hardly your typical Yuletide fare.

Earlier on the album, in “When I Was a Freeport and You Were the Main Drag””, she sings “I’m mad at my country”. On “Christmas in My Soul” she explores these feelings in more depth – “I love my country as it dies in war and pain before my eyes.”  It’s a protest song – a call to arms to fight for the “laws in the book of love” and to bring “dignity” back to an America embroiled in an unpopular war in Vietnam and (among other things) the controversies surrounding the Chicago Seven and the FBI crackdown on the Black Panthers. The specifics of the lyrics date it to the time but the message is, unfortunately, still relevant. 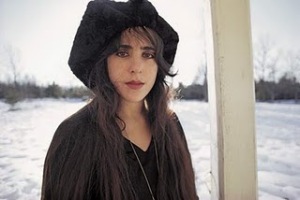 Christmas, a celebration of the birth of Christ, is equated by Nyro with a rebirth – a rebirth needed by America and a rebirth she has found in her soul.

The song is the dramatic closer to an album that touched on many of the styles of music she had explored already and would explore in the future. It’s a transitional album, but includes some of the strongest songs of her career.

The “beads of sweat” of the album title come from the song of the same name – a fevered southern soul number propelled by Duane Allman’s guitar and an ace band of session heavyweights.

Nyro also brought in jazz harpist Alice Coltrane on the sensual “Upstairs By a Chinese Lamp” and “Map to the Treasure”, pointing the way to future Eastern-influenced forays such as on 1976’s Smile.

“Up on the Roof” (by Gerry Goffin and Carole King) was the single and the first cover song she’d ever put on a record. Though it’s a warm, faithful rendition, it doesn’t quite fit in with the swooping dynamics of the rest of the album. Just a year later, however, she would release an entire album of covers in Gonna Take a Miracle.

Christmas… is, strangely,  the most overlooked and forgotten of Laura Nyro’s albums.  Columbia Records even skipped right over it when they were releasing remastered and expanded editions of her early works in 2002.  In a way, this neglect and obscurity lets Christmas and the Beads of Sweat be a sort of secret – a treasure waiting to be discovered.