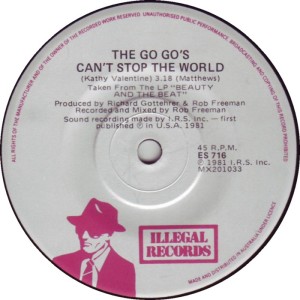 Today is Valentine’s Day, so it seems only appropriate that we take a look back at “Can’t Stop the World”, Go-Go’s bassist Kathy Valentine’s contribution to the band’s debut 1981 smash hit album, Beauty and the Beat.

The tune was the closing track and was Valentine’s sole songwriting credit on the record. It almost didn’t get included. According to Valentine, who had recently joined the band, the bulk of the recording was done but the producer wanted one more song to complete the LP.  She had written “Can’t Stop the World” soon after moving to Los Angeles, a few years before joining The Go-Go’s. However, when the time came to find another song for Beauty and the Beat, she didn’t have the confidence to suggest her song as the needed missing piece.  Luckily, bandmate Charlotte Caffey had heard Valentine play the tune and pulled for it’s inclusion.  (“Can’t Stop the World: The Go-Go’s ‘Beauty and the Beat’ Turns 30”, Austin Chronicle, Aug. 19, 2011)

The band went for it and, as a result, the song triumphantly caps off an album that still feels fresh today.  On one hand it’s a motivational pep talk, but it’s also a defiant declaration of the value of perseverance and a positive attitude.   To this day, the Go-Go’s are still the only all-female band to have had a #1 album where the band wrote all the material and played all the instruments.  They didn’t let the world stop them and say it couldn’t be done.

And how can you not like a song with a lyric like “Your heart, your will, your car / They’ve all been broken”?