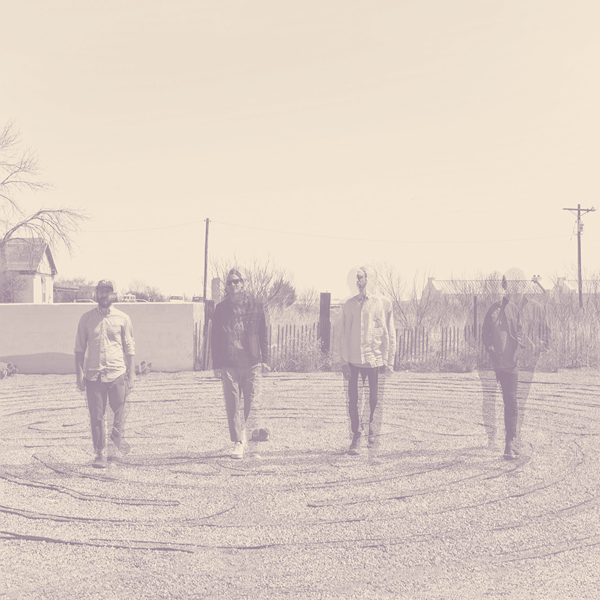 Marfa. A unique town with a unique name. Weird even. Like someone with a mouth full of tacos trying to say “Martha.” At the same time, there’s something about it that sounds a bit mysterious, makes me think of UFO’s or something. 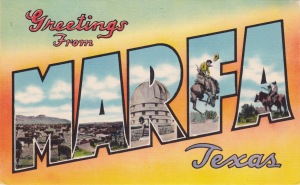 Marfa sits in the vast Texas desert near the border with Mexico. Remote even by Texas standards. I first heard of it in the 1984 Kevin Costner film Fandango. Nowadays it’s become a cultural destination of sorts with an annual festival called Marfa Myths, but back then it wasn’t as well known, notable largely for the James Dean film Giant which was shot in and around the town (as we learn in Fandango – a movie I should point out as featuring a unique soundtrack, which I wrote about for PopMatters.)

But, why am I writing about a small desert town on a music blog? Well, the aforementioned Marfa Myths (co-run by record label Mexican Summer) is responsible for a series of recordings pairing different bands/musicians in Marfa for the festival in collaboration with each other. The first two featured Connan Mockasin with Devonte Hynes and Ariel Pink with Weyes Blood. The third, appropriately titled Myths 003, unites two members of Swedish psych/folk/rock (ah, labels…sometimes they can be difficult) band Dungen (Gustav Ejstes and Reine Fiske) with two (Jeremy Earl and Jarvis Taveniere) from Brooklyn-based lo-fi avante-folk rock group Woods.

The music is expansive; on first listen parts seem a bit rambling but on subsequent listens, the focus and tight interplay of the musicians is readily apparent. I’m not familiar with Woods’ music, but they must be good musicians to play on Dungen’s level. The collaborative sound here is not too dissimilar to Dungen’s previous sonic journeys but feels a little more spacious and “lighter” in some places. This is no doubt due in part to the desert environs of the Marfa recording locale, and I suspect also due to Woods’ adding a more “American” feel, almost country rock, to the proceedings.

Myths 003 is an uplifting album, purposeful and rooted in 1960s psychedelia and prog, yet never succumbing to those genres’ occasional pitfalls of lengthy songs outstaying their welcome. Most  of these tracks fall under the 5:00 mark. “Loop” starts things off in a dramatic way with a drum and bass backbone like a coyote loping through the hot-sun desert, while Fiske’s guitar paints the aural sky and mellotron/casio presents the melody (not sure what the instrument is, sounds like an organ to me, but there’s no organ listed in the credits).  “Turn Around” mellows the scene out, with a vocal number that reminds me of Mercury Rev. “Marfa Sunset” is the only really musically dark place on the record, sounding like a stroll through a haunted graveyard, complete with early Pink Floyd-esque sound effects. For me this is only place the album falters as they overdo the “ghostly bird scream” sound effect.

“Morning Myth” is a woozy sunrise benediction, while “St. George” has echoes of 70s era Yes. The song sung by Dungen’s Ejstes’ is called “Jag Ville Va Kvar.” I tried to get a translation from Swedish to English online…still not sure what it translates to. Something like “I Wanted to Turn Left” or “I Wanted to Leave” (ha ha, maybe a secret message that he really didn’t want to be there? Just kidding…)

Marfa seems like a happenin’ destination and this audio document of skilled and inspired musicians transmitting the feel of the place makes me want to visit even more.  As Dungen’s Reine Fiske writes in the liner notes: “Being in Marfa and given total freedom of creativity gave us the presence of the desert in between- studio, earth and sky, amongst other wanderers of culture and music gave us a conception and a chance of what this music could be etched in time for us, this is what came to be – and this is what will always stay there with us.”

Here’s an ongoing loop of Marfa and environs video soundtracked to the album. Whenever you refresh the screen, you’ll get a new image:
https://marfamyths.com/loop/