Funny how we can mishear the lyrics to a song and the whole meaning can be changed (a “mondegreen“, as it were.)  I was sitting in a café the other day and “So Lonely” by the Police was playing in the background. In my mind I was brought back in time to when I was 14 or 15 and thought the song was about some girl named Simoné (pronounced “Simonay”…which sounds a lot like “so lonely”.)

I used to ride my bike at least once a week to the mall, where a TV and stereo store was tucked away in a second floor corner. This was the age of the videotape and the mall store had a section along one wall of rental videotapes in big clunky plastic boxes, as well as a generous  selection of laserdiscs (which were pretty exotic, as nobody else was hawking laserdiscs in my city.)  They had a live Police tape or disc which was always playing on one of the big screen TV’s for sale at the front of the store – probably the Synchronicity concert, but for some reason I remember a filmed outdoor performance.

I’d lock my bike up outside under the spindly decorative palms and walk in from the melting Florida summer heat to the cool air-conditioned sanctuary of the mall corridors, 1980s décor rampant.  Aiming for the TV/stereo store I’d pass by the stores selling Member’s Only jackets, acid-washed jeans, and cassette tapes, as well as the darkened arcade where kids were feeding quarters into Pac-Man and Asteroids machines.

Once I got there, I’d usually make a show of browsing the rental videotapes, a strange collection limited to sci-fi and fantasy titles such as Excaliber, Conan the Barbarian, and the late 70s animated version of The Lord of the Rings mixed with very adult R-rated movies pushing the limits of allowable nudity like Looking for Mr. Goodbar and Last Tango in Paris, before nonchalantly sidling over to the TV playing the Police, where I’d plant myself for a while. The sunny but edgy mix of reggae and punky pop rock, anchored by Stewart Copeland’s hyperactive drumming, was so fresh and different sounding that I’d keep telling myself I was going to leave after the next song, and then the song after that – especially as the curious looks from the sales guys increased. 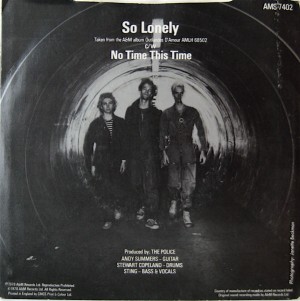 “So Lonely” was one of my favorites and I’d wait for it to cycle through to that song if it wasn’t on when I got there. They had the tape (or laserdisc) on perpetual repeat, so I knew it would get there eventually. ‘Course, as I mentioned, I didn’t know the song’s name and thought Sting was singing about being generally unhappy unless he was with this probably exotic (maybe from somewhere in the French Caribbean, I thought), life-affirming woman named Simoné. I figured he was just singing her name over and over during the chorus because he was so taken with her and she was an antidote to his general malaise.

Then again, I probably did have an overactive imagination as a teen….