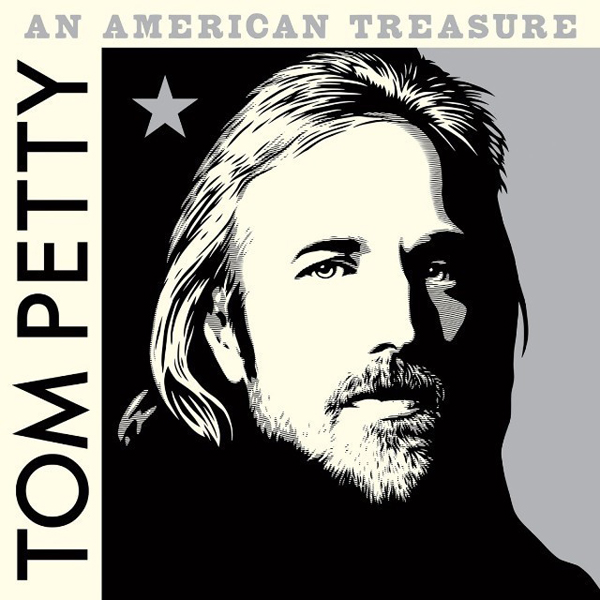 Of course we’re not talkin’ about a literal resurrection, but the resurrection of Tom Petty’s music, his voice, his life-force as it were, via his music, all via the box set An American Treasure, released almost a year to the day since his death.

An American Treasure is a different kind of box set, with no real precedent. Most boxes are arranged chronologically or group songs according to type. For example, Playback, Petty’s 1995 box set, had a CD of hits, separate CD’s of outtakes, etc.  Some boxes have studio tracks separated from live tracks. Songs on most box sets are selected by the artist and/or record company.

Treasure, on the other hand, is a gumbo of selections, which, on first glance, has no real rhyme or reason apart from a loose division by decade. But within those decade divisions there’s no order to the chronology and there are album tracks next to previously unreleased outtakes next to live songs.  Initially, this bothered me…there’s no strict structure, no properly arranged strict historical progression! As a librarian, there’s a part of me that cries out that this is wrong! Fine, if it’s a personal mix, but this is an official public release, with all the posthumous posterity that entails.

Ah, but there’s the thing: it is a personal mix and a mix so unique in its origins that it can get away with the way it’s constructed. Each track was selected by a team comprised of Petty’s wife Dana, daughter Adria, bandmates Mike Campbell and Benmont Tench, and longtime Petty friend engineer/producer Ryan Ulyate. These are songs that are favorites of that team, songs they felt were deserving of wider recognition and as Ulyate has said, songs they put to the test of “would Tom have included it?”  It was then sequenced for flow, assumedly either by committee or by Ulyate.

Looking at the box set objectively, as an outsider, does it deliver? Is it a good overview, a good portrait of the artist? The short answer is yes, with a caveat. Undoubtedly, given unlimited access to Petty’s “vault,” everyone would choose different tracks – if nothing else, different deep album cuts. For example, “Rockin’ Around With You,” a nice but relatively slight song in his catalog, might seem like an odd choice. Yet, the liner notes reveal that it was one of the first songs Campbell and Petty wrote together. So, it could be said that the people who were close to the artist have more “weight” attached to their picks. Or at least that their picks are more interesting for the listener, knowing the contexts from the liner notes. I would never have given “Rockin’ Around With You” a second thought but will always see/hear it in a different light now.

I’m sure as I listen more, other tracks will stand up and demand to be noticed. Because, what comes through on An American Treasure is just how much of a songwriter he was. I mean, most box sets you’ve got some outtakes and alternate versions, some live songs, maybe some unreleased tracks – Petty coulda filled entire additional albums with the number of unreleased songs he had…and they would have been quality albums. I’m sure if he had survived, there would have been at least one more box set down the road. It would have been a different beast, but I’d wager a lot of these cuts would have been on it. Due to that deep well, his legacy of song will continue for quite some time and that’s something to look forward to.