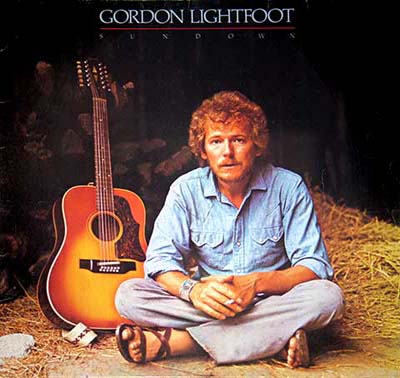 The Internet has facilitated many positive things, but the unedited, often unverified exchange of information can also create a giant repository of confusion. Take for example, the Songfacts page about Gordon Lightfoot’s 1974 hit “Sundown”. Songfacts is a website where readers can add their own comments about the story and/or meaning behind individual songs. This can be good when people add supported stories or direct quotations, not so good when it’s guesswork and hearsay. Discussion groups and social media tend to be better for that kind of thing than a site called Song facts. The entry for “Sundown” includes over ten theories about its meaning. These range from the plausible and supportable to the near ridiculous. And “Sundown” is, in comparison to something like “Stairway to Heaven”, a pretty straightforward tune.

We do know these things: Along with “The Wreck of the Edmund Fitzgerald”, it was the biggest song of Lightfoot’s career. It also showed a very different Lightfoot than what fans had been used to for the last eight years. This was no wistful regret ode a la “If You Could Read My Mind”, no sensitive “The Way I Feel”. The closest precursor in tone was his debut album’s breezy love ‘em and leave ‘em anthem “For Lovin’ Me”. “Sundown” is much more funky than that early track, however, and finds Lightfoot emotionally chained to a particular love interest, not going anywhere. 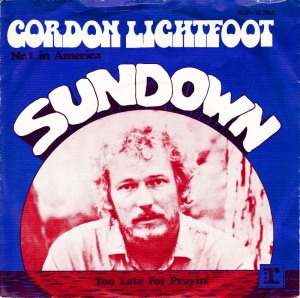 There was still the smooth, warm voice, but it was voicing a bitter, jaded story. This was a love/hate confessional about a “hard lovin’ woman” who’s got him “feelin’ mean.” He knows she’s no good for him, but he can’t resist her. And he’s not too happy about it. The stars in his eyes are in a dark sky. “Getting lost in her loving is your first mistake”, he sings. We don’t ever find out what the second mistake is – the situation is that bad. So bad he has to be drunk to deal with it (“Sometimes I think it’s a shame when I get feeling better when I’m feeling no pain”).

For every line about her allure, it’s followed by a line that paints her in a less flattering light, at times making her sound like a prostitute.:

“I can see her looking fast in her faded jeans
She’s a hard loving woman, got me feeling mean”

The question of who the woman he was writing about is has become a matter of debate among listeners. Theories range from it being his wife Brita Oliasson, to any number of ex-girlfriends.

Though Lightfoot hasn’t (to my knowledge) gone on record and named the woman, it’s commonly accepted that she’s one Cathy Smith [pic]. Smith had been involved with various members of The Band before meeting Lightfoot, when they began having an affair in the waning days of his first marriage. In the early 80’s she’d be convicted of administering the fatal heroin overdose that killed John Belushi.

[Note: In the 2017 Lightfoot biography by Nicholas Jennings, it’s stated that the song was indeed about Cathy Smith – “One night in 1973, he [Lightfoot] was alone at the farmhouse writing songs, fueled as usual by coffee, booze and cigarettes. Smith had driven into Toronto to party with some friends. The whole time she was gone, Lightfoot fretted about who she was with and what she might be doing. ‘I was hoping that no one else would get their hands on her,’ he once said, ‘because she was pretty good-looking.’ It led Lightfoot to write his sexiest song, one that expressed exactly how he felt about Smith ‘lying back in her satin dress” or ‘looking fast in her faded jeans.’ But ‘Sundown’ also had a paranoid and menacing tone, as a threatening Lightfoot vented his mistrust of someone who might be creeping around his back stairs, looking to move in on his woman.”]

So, who is the line in the chorus “Sundown, you better take care, if I find you’ve been creeping ‘round my back stair” addressed to? We’ll conveniently forget the fact that upon hearing the song as a child, I used to think Lightfoot was addressing the song to the sun (the sundown) itself in that line. An interpretation which doesn’t make much sense, but in my defence, I was just a kid and didn’t pick up on the implications of “creeping ‘round my back stair”.

The fact that he changes the pronoun he’s been using from “she” to “you” when he gets to that chorus suggests that he’s voicing a warning to someone other than the woman. Most likely to any potential suitors or competitors for her affections. In a 1975 Crawdaddy magazine interview he says “All it is, is a thought about a situation where someone is wondering what his loved one is doing at the moment. He doesn’t quite know where she is.” Despite the narrator’s conflicting feelings, though, Lightfoot says “He’s not ready to give up on her, either, and that’s about all I got to say about that.” It seems more a statement of general paranoia than one directed at a specific person.

The theories on Songfacts fly fast and furious, though. The funniest (to me, anyway) is the assertion that “Sundown” was an early ‘70’s nickname for fellow Canadian singer/songwriter Bruce Cockburn and that Cockburn was having an affair with Lightfoot’s wife or girlfriend. Not only would it be totally out of character for Cockburn (married himself at the time), in my years of at times semi-obsessive study of Cockburn’s work, I’ve never heard of him referred to as “Sundown”. And really, would Lightfoot have named the album after his rival?

This does set up a humorous hypothetical story line, however. Sort of like an old western, maybe called “Shootout at the Folk Festival”, which might go something like this:

A bitter wind blew backstage, stirring up the dust. Out of the haze stepped Sundown. He reached for his six string, but Lightfoot was faster. What other choice did Lightfoot have? He had warned Sundown not to come creeping around his back stair, putting the moves on his hard lovin’ woman. She just looked so damn good in that satin dress, in those faded jeans. He could understand why Sundown had gotten lost in her lovin’. That was Lightfoot’s first mistake, too, after all. But Sundown had picked the wrong day. Today Lightfoot was feelin’ mean.

In the end, the resulting song was a case of a good thing resulting from adversity. As Gordon Lightfoot slowly rides into the sunset 40+ years after “Sundown”, his funky folk rock tale of jaded paranoid love is still a classic rock staple. You’ll hear it any number of places – on soft rock, easy listening, oldies, and country radio. You might hear it in the grocery store, or maybe covered by your local indie rock band. It’s a song that’s insinuated itself into pop culture, stepping boldly through the front door, not hiding out on anyone’s back stairs.