Does it matter what a band calls itself? If the dice roll right and the stars align (and the music’s strong enough to have an impact) a cleverly chosen name can transcend its literal meaning and become more than the sum of its parts. Take for example, the name Led Zeppelin. It’s become such a part of the culture’s nomenclature that we don’t even think of what the words mean on their own anymore. “Led” (or “Lead”) meaning something heavy and/or a type of metal and “Zeppelin”, meaning a large blimp.

The two words together have come to automatically evoke the band. Maybe you visualize the songs when you hear the name – “Stairway to Heaven” or “Kashmir”, or any number of others. Maybe you picture Robert Plant’s strutting and wailing, Jimmy Page’s guitar heroics, maybe John Bonham’s thunderous drumming (you probably don’t think of bassist John Paul Jones, though – he made George Harrison look like a raving extrovert.) It’s practically become one word now: Ledzeppelin. Said in one breath. 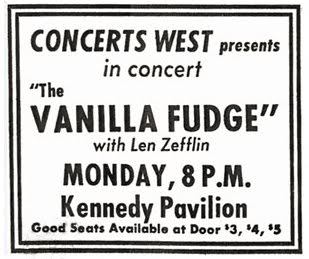 Yet, it’s easy to forget just how weird the name was when the band debuted in 1968. Concert advertisements and press agents were constantly misspelling it – Led Zepplin, Lead Zeppelin, Led Zeptlin, and the funniest- Len Zefflin (not to be confused with Les Nessman, character in late 70’s sitcom WKRP in Cincinnati).

Why did they choose such an unusual name? The story has been told many times, but bear with me as I summarize it: Page’s previous band The Yardbirds had split up in 1968 and he was left to fulfill already scheduled tour dates. The end of the group gave him the opportunity to hand pick the kind of band he’d always wanted. The short tour was carried out as the New Yardbirds with the three additional musicians he selected, who became Led Zeppelin. But, the very 1960’s sounding “New Yardbirds” name wasn’t gonna work for the upcoming 1970’s. Plus, let’s face it, it doesn’t fit with the kind of music they were making. Even though “yardbird” is slang for prisoners in the exercise yard or hobos in a train yard, it also sounds like a plastic flamingo lawn decoration. “Birds” was slang for girls in England, but that would be lost on American audiences – and how could they succeed in world domination if they were saddled with a parochial name?

Page had been holding on to another name, though, for a few years – since 1966 when he, Jeff Beck, and Keith Moon and John Entwistle of The Who talked about forming a band together. Either Moon or Entwistle (stories vary) joked that such a band would go over like a “lead balloon” and the other took it to the next level, comparing it to no mere balloon, but a blimp – a zeppelin.

Some accounts say that Jimmy Page also credits Iron Butterfly as a partial inspiration for the name (in fact, the two groups did play together early on – a perfect double bill if one was pairing bands based on name alone).

Word is that manager Peter Grant changed the spelling to “Led” so it wouldn’t be pronounced wrong. Which makes sense to me – I never used to know how to pronounce Bernie Leadon of the Eagles’ name (It’s pronounced “Ledon”). Shortening “Lead” to three letters also made it more like a person’s name (shades of Len Zefflin), creating a more humanizing, familiar feel. Kind of like your buddy, Led.

If nothing else, the letters just look good together: LED ZEPPELIN. And that lightning strike “Z” in all its zigzag glory also translates well to logos. Later, Kiss used the double ‘s’ in their name – basically a backwards ‘z’ – to great effect in their own logo. Zeppelin even had their own font, created by Storm Thorgerson and Aubrey Powell of the Hipgnosis album cover design team, which debuted in 1973 on the Houses of the Holy album.

“Led Zeppelin” can also be easily shortened as a mark of affection and uber-fandom. “Zeppelin!” they yelled at outdoor stadium concerts. Or just “Zep!” It’s like “Creedence!” Or “Sabbath!” Or “Skynyrd!” As Led Zeppelin needed to put a picture of a crashing zeppelin on their first album cover to help explain their name, Lynyrd Skynyrd had to actually title their first album “Pronounced ‘lĕh-‘nérd ‘skin-‘nérd”. Even though people now say their name correctly, I see Lynyrd Skynyrd misspelled all the time. As is Led Zepplin . Or Def Leppard (Lepperd) – a band whose name consciously echoes Zep’s down to the two p’s. 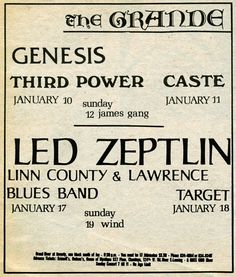 From its inauspicious beginnings as a self-deprecating, derogatory joke band name, Led (Lead) and Zeppelin are two words that, when put together, have now totally lost their literal meaning and become their own singular entity. A code word, or like something from a different language. As Jimmy Page had a knack for picking bandmates, it turns out he also did for names, as unlikely his choice may have seemed. Music journalist Keith Shadwick notes that Page presciently felt the name brought “the perfect combination of heavy and light, combustibility and grace.”

Formidable but free and easy, man.