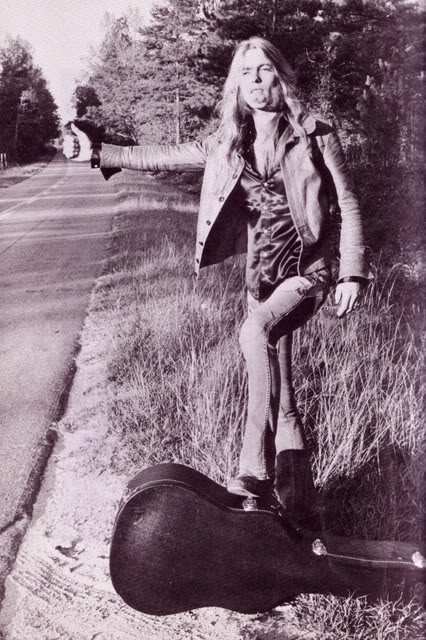 Though “Melissa” has always been my favorite Gregg Allman song, (and it’s my wife’s name, which bumps it up a few notches), “Multi-Colored Lady”, from his first solo album, 1973’s Laid Back , shares some of the feel and mood of that earlier song. I sometimes picture the roaming traveler of “Melissa” further along on his gypsy journey, a lonely and sensitive midnight rider haunting the highways of America.

A demo of “Multi-Colored Lady,” was resurrected on the 90’s collection One More Try: An Anthology (and while we’re checking out demos, listen to the original demo for “Melissa”, recorded by Gregg and Duane in pre-Allman Brothers Band The 31st of February.)  It works well in this intimate, unadorned acoustic version, coming across more like a storyteller relating a real experience than the album version.

Yet, it’s somewhat of a strange song. Even the title sounds awkward. Critic Robert Christgau gave it a backhanded compliment in his review of Laid Back by writing “…it must be admitted that he puts a lot into “These Days” and “Midnight Rider,” and that the reason you can listen to such originals as “Please Call Home” and “Multicolored Lady” isn’t the writing.”  But he’s right to some degree.

The lyrics do stray into the enigmatic at times, but near as I can figure it Gregg’s on a bus and tries to strike up a conversation with a “broken hearted bride” who doesn’t really want to talk. Turns out she “lost a million in the game” and she asks him for directions to death row (but he “didn’t know the way”.)  I used to think she lost money gambling, but now I think he’s using that as a metaphor- the game being love. And she’s broken hearted because her new husband is now on death row. Or maybe she lost a million bucks and her husband is on death row. Or maybe death row is a metaphor. Or maybe I’m just trying to read too much into it all. Either way, “It wasn’t her day” indeed.

He eventually gets her to smile. But then he tries to pick her up at the end of the song, which always rang a little “c’mon, really?” to me.  Still, he says to her “Oh, by the way I’m bound for Rome,” which at first sounds like a throwaway line, but I think is really just Gregg having a little chuckle as we (and the broken hearted bride) know the Rome he’s referring to is only Rome, Georgia and he’s already told us that Georgia “ain’t no paradise” (or “festival”, as he sings in the demo version). 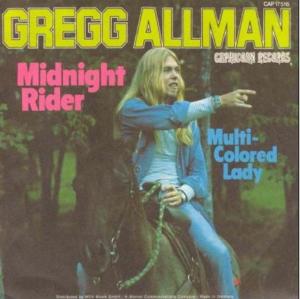 I’m still not sure what he’s talking about when he describes her as a rainbow containing “passion blue” (?) and “mostly shades of green.” Maybe she’s got motion sickness from the bus ride?  Somehow, I don’t think that’s what he meant.  I’m willing to grant him poetic license, though, as other parts of the song are quite evocative. If you’ve ever driven through Georgia, you’ll be familiar with the endless miles of Loblolly pines – those “pine trees in the rain”. It’s not so much the words of the song but how they all fit together to paint a picture, with Allman’s road weary voice a perfect match.

And we could say that for most of the material he recorded in his long career – his voice, despite its occasional moroseness, elevated the songs to a memorable and exceptional place.