Rush’s 1984 track “Red Lenses” is a textbook example of a “deep cut”: a track not well known and generally overlooked when an album first came out. Often deep cuts get their moment much later, when everyone’s tired of the hits and explores a little farther.

Well, that’s not exactly the case with “Red Lenses,” as it’s a Rush song that’s still obscure, and not even well–liked  (if its known at all). As a Nebraska newspaper review said at the time: “The biggest disappointment of the album is Red Lenses, in which [Geddy] Lee attempts some heavy metal rap music. It could have easily been left out.”  I don’t hear it that way at all though…(“heavy metal rap music”?) For me, it’s a cool and unusual little song, unique in a number of regards.

This where I could brag about how clued in and with it I was when “Red Lenses” was first issued, that I picked up right away on it.  I’d be lyin’ though. When Grace Under Pressure – the album it was on – was released, I was a teenage Rush fan who’d often lay in bed at night listening to my little digital clock radio, hoping for “Tom Sawyer” or “Fly By Night.” In those pre-Internet days, most of us had no idea a band was releasing a new record until the radio told us.  So, one spring evening, I was taken off guard when the DJ announced a new Rush song and played “Between the Wheels.” I loved the rich, deep sound of it despite its heavy synth (synthesizers being a troubling development for Rush fans at the time) and bought the album.  “Wheels” remained my favorite track but “Red Lenses” just passed me by, making no dent on my psyche at the time. 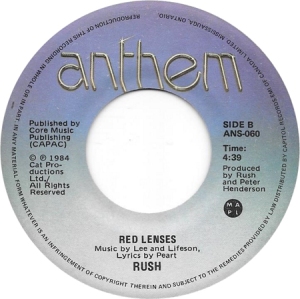 Grace Under Pressure was appropriately dystopian and Orwellian for 1984. It was full of tracks warning against totalitarianism, and concerned with emotion vs. technology, all clothed (ironically) in one of the band’s most technological records – keyboards, synthesizers and electronic drums.

Ever one’s to stay current, the Rush of the mid 80s is a far cry from the heavy progressive band of the 70s and light years from the riff-based hard rock of their first album, 10 years previous. As Douglas Maher says in Rush: Album by Album: “I don’t really think that anybody who listened to “Red Lenses” who was a fan of Rush in 1977, went, ‘Oh yeah, yeah, this is where I’m at.’” On “Red Lenses” you can really hear the influence of the Police, especially in Alex Lifeson’s guitar style, adding color with sharp ringing chords which texture the musical backdrop. In fact, listen to the guitar and bass in the Police’s “Walking on the Moon” and compare it with “Red Lenses” and you’ll hear quite a bit of similarity.

Writing about sensationalistic fear mongering by the media in relation to the “red scare” and Soviet vs. American cold war relations, drummer/ lyricist Neil Peart seems to be taking from Beat poetry, as well as mid-century poetry a la T.S. Eliot. Furthering the poetry comparisons and differentiating the track from its neighbors, the lyrics sheet has all the words to “Red Lenses” printed in lower case (wasn’t it e.e. cummings whose poems shunned capital letters?) Even though the song’s specific subject matter is a bit dated, the overarching themes are more long lasting and it’s a well-crafted song, using puns and reworking clichés.  Peart said:

“This was probably the hardest song I ever worked on, in spite of the pleasure it gave me. It went through so many rewrites and changed its title so many times. Each little image was juggled around and I just fought for the right words to put each little phrase and to make it sound exactly right to me, so that it sounded a little bit nonsensical. I wanted to get that kind of jabberwocky word game thing happening with it, and also there are little things going on that your mind sort of catches without identifying, like a lot of poetic devices. You take the number of words that sound the same or start with the same letter or whatever. You just certainly don’t start in the middle of it and go, ‘Oh, that’s alliteration.’” (Rush Tribute: Merely Players)

Those red lenses are all over Grace Under Pressure as a symbolic device.  Apart from “Red Lenses” there’s “Red Sector A” and the “Red alert / Red alert” in the lyrics to “Distant Early Warning”, the lead track and hit. The album cover is predominantly blue and grey, but even there “Rush” is in red and red seeps in from the top in an ominous way, blood-like and in the storm clouds, and in the evil eye almost hidden in the small black opening in the top middle.

For a band so known for their lengthy instrumental interludes, it’s very unusual for them to jump right into the vocal before any instruments come in, as they do in “Red Lenses.” As such, it immediately grabs your attention and puts the focus on the words. That said, musically, there’s a lot of inventiveness going on as well.  The complex polyrhythms of the drumming most obviously (this is a Neil Peart song through and through – from words to beats), but also the jazzy funk bass.

As its Rush feeling a little loose and experimental, they would have some fun with the song during the 1984 tour.  Usually it would be the first song of the encore and often included a drum or bass solo. As we know, you can’t dance to most Rush songs, and “Red Lenses” is more undanceable than most. Lifeson pokes some fun at this with his intentionally awkward robot-like dance during some shows, as in this one from Japan (around the 3:28 mark).

On an album considered one of their darkest, the ability of “Red Lenses” to combine a jam feel with the precision that’s Rush’s trademark, plus the song’s impressionistic wordplay, sets the song apart for me. Unfortunately the track got a little lost with its placement as the second to final cut, but it gives the whole collection more variety. Or could it be I’m just seeing it through rose-colored glasses?… 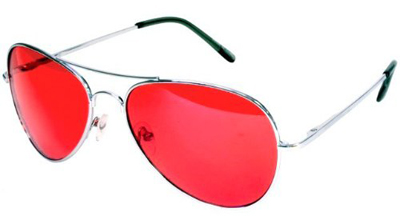