Sometimes an album seems so unique that you can’t imagine anything else quite like it. Sometimes you’re wrong.  After living with guitarist Pat Metheny’s 1979 recording New Chautauqua for decades as one of my favorite albums and thinking it created an aura, a mood, that no other artist had really explored, I recently (thanks to the recommendation of Wilco’s Nels Cline – see below) came across another album – John Abercrombie’s Characters – that, for me, is startlingly similar in sound and feel to that Metheny record.

New Chautauqua is a solo record, largely acoustic, featuring Metheny playing 6 and 12 string guitars, bass, as well as a 15 string harp guitar. He’s described it as his most personal record – largely impressions and memories of his youth growing up in the Kansas heartland. When I first heard it as a high schooler, I was hungry for acoustic guitar, Metheny’s in particular. I had heard it in small doses on his As Falls Wichita, So Falls Wichita Falls and on First Circle. When I bought New Chautauqua as my next Metheny album, probably based on the acoustic guitar cover photos more than anything else, it filled that audio need, but more than that, it opened new horizons for me of what could be conveyed through music. 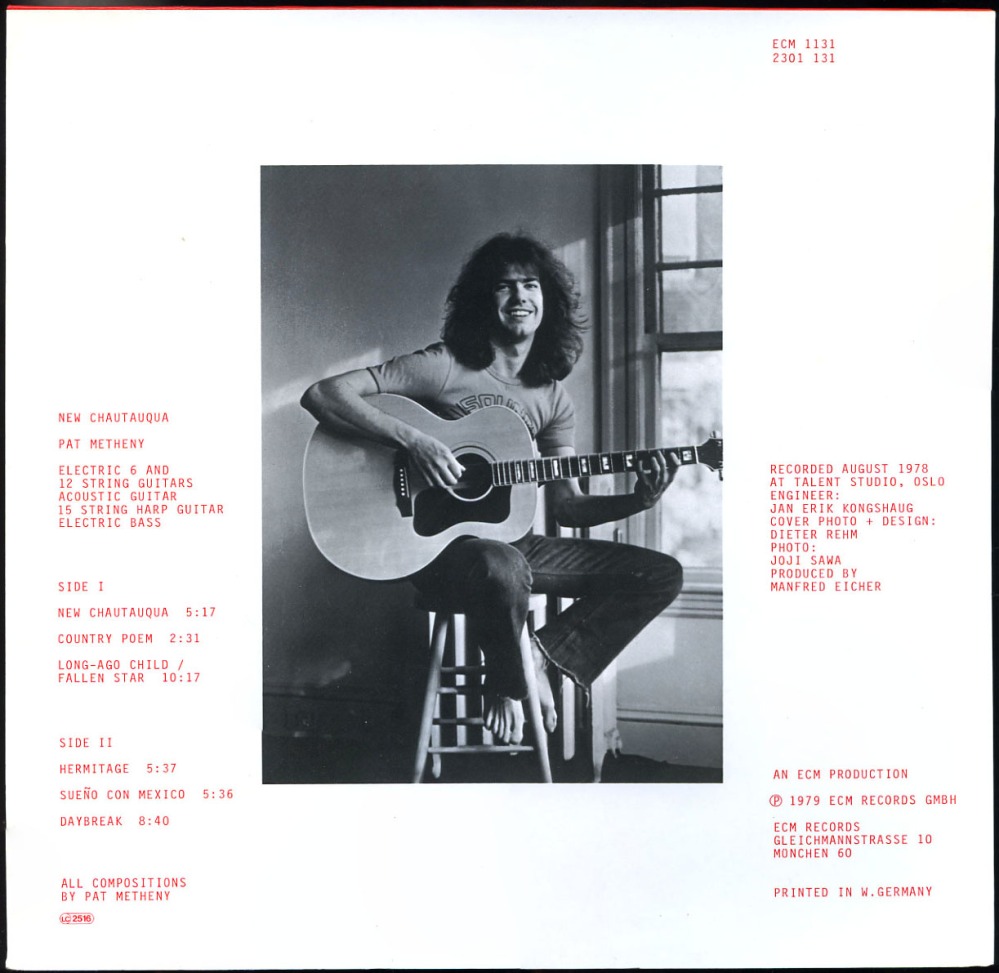 The lead-off title cut’s fast strumming leaps from the speakers, conjuring bright wide open spaces, followed by the more laid back “Country Poem,” with its ruminating contrapuntal acoustic cascades (which took a few listens for my brain to wrap around and find the underlying melody.) This track sets the overall quiet tone for the rest and “Hermitage” and “Sueno Con Mexico” are perfectly encapsulated mood pieces.  I hesitate to say what they sound like, because everybody brings their own impressions to music listening, but to me they’re peaceful warm orange-gold desert sunsets. Mental images suggested by the titles in part, no doubt.

“Long Ago Child / Fallen Star” is a dreamy ambient piece, a reverb-enhanced haunting night track. “Daybreak,” the album closer, has two sections. Beginning with the sun slowly creeping to the horizon, night sky slowly lightening till the first rays break across the land and Metheny’s rich, full acoustic strumming comes in and he solos on top. In the 70s (and anytime really) pretty much nobody else was using jazz idioms and playing them so melodically; song-like, combined with folk and country and rock textures in an accessible way yet still with a lot of integrity.

In the aforementioned Nels Cline essay on John Abercrombie, who passed away in August, he mentions a few of the highlights from Abercrombie’s discography, including Characters. He writes, “…it had an effect on me and my musical thinking that was utterly profound. John’s playing goes far beyond showing off chops and merely showcasing his abilities. It reveals varying voices, like someone telling you a story but not being afraid to change his voice to say different characters’ lines to make the story come alive.”

Characters was recorded less than a year before New Chautauqua and both records were on the ECM label. Both were tracked at Talent Studio in Oslo, Norway by long-time ECM engineer Jan Erik Kongshaug, and each featured liberal use of overdubbing to fill out the sound and basically give the artists the opportunity to play alongside themselves. Like New Chautauqua, Characters is a completely solo guitar record, utilizing an unusual instrument alongside standard guitars – in Metheny’s case it was a harp guitar and in Abercrombie’s an electric mandolin (which he later said was really an alternately tuned soprano guitar marketed by Fender as a mandolin. Unusual, though, either way.)

Metheny said once, in reference to jazz guitarist Jim Hall, “I call him the father of jazz guitar, in the sense that all of us – Frisell, Scofield, Mick Goodrick, Abercrombie, especially the five of us – are all very easily traceable through Jim’s thing, yet at the same time we don’t sound very much like each other.” And he’s right…except he and Abercrombie DO sound alike at least once – on these two albums.  It’s as if they both tapped into the same inspiration or feeling (maybe there was something in the Oslo recording studio water?) Some of this is no doubt due to them both being on ECM and both produced by label head Manfred Eicher. Though ECM is usually considered a jazz label, by and large it’s not your typical jazz.  Much of ECM`s output is more impressionistic, atmospheric, and minimalist; it often sounds like the lonely roads and northern landscapes that grace many of the label’s album covers.

On Characters, “Parable” is divided into two parts, much like Metheny’s “Daybreak.” It opens with minimalist mandolin as a prelude, before acoustic guitars come in for a richer and fuller melody. Both albums have their share of calm starkness, of “quiet nights of quiet stars,” as the old bossa nova song would say. “Telegram” has a very Metheny-like melody, wistful and bittersweet.  “Evensong” has a delicate acoustic finger picked base with rising and falling slide-like notes courtesy (I’m assuming) of the guitar volume knobs, playing textures that oft-times Metheny accompanist Lyle Mays might be playing on synth on one of their albums.  “Ghost Dance” is this album’s “Long Ago Child / Fallen Star.” Ghostly (of course, what else would it be?) multi-tracked tones echo over an acoustic fingerpicked melody. The sound is somewhat spooky and skeletal but not in a threatening way, rather in a mysterious and ethereal way.

“Ghost Dance,” however, is more jazz-rooted than “Long Ago Child / Fallen Star” and the same can be said for the majority of Characters.  Characters is, of course, its own album and Abercrombie a unique and visionary player.  I do, though, find the similarities striking in the way the two albums present themselves and, well, the way they both “feel.” Though New Chautuaqua was Metheny looking to folk and country to inform his playing, the contemplative, intimate, unhurried mood of both albums is very alike. There seems to be a kind of connection in both to a kind of spiritual state, something connected to nature and time.