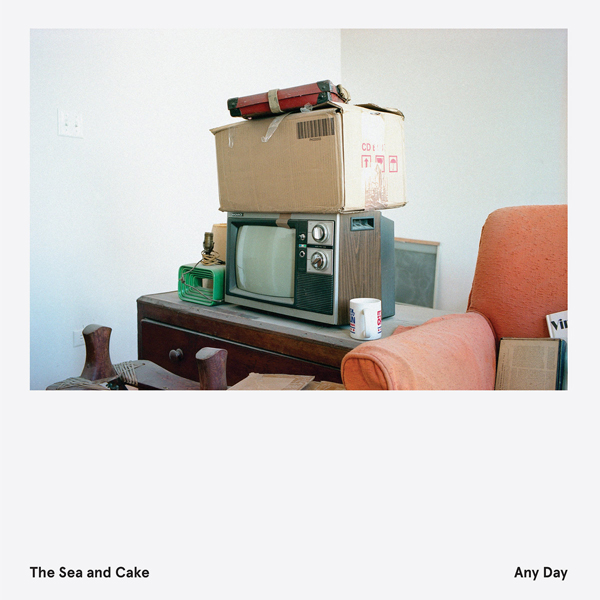 Any  word or combination of words can be the name of a band. Take “The Sea and Cake” for instance: a band name made up of two words that have nothing to do with each other. When the long-running group operating under that moniker chose the name, it was based on a mishearing of the title of a song called “The C in Cake” by a band called Gastr del Sol (itself an ad-hoc word combo.)

Is the name descriptive? I suppose, to a degree. Their music can be deep, rolling, stormy, calm (sometimes in the space of one song) and it also has a certain cake-like sweetness. The number of calories varies. Their song “Covers” was very filling for me a couple of years ago when it wormed its way into my consciousness like a…like a chocolate almond espresso torte (okay, maybe walnut.)

I intended to explore The Sea and Cake’s other albums but life happens and other priorities come along, other music on the radar, so I never did. So, when I read last week that they had a new recording out (called Any Day), I took the opportunity as a convenient and welcome excuse to jump in right away.

As with “Covers,” the music on Any Day has a strange mix of subtle intensity and mellowness. Sam Prekop’s distinctive breathy vocals largely define the band’s music, and through a certain lens they can sound a bit affected at first, with sort of a “surfer cool” feel to them (I was surprised to read they’re from Chicago, not California), but the more one listens, the more it works within the parameters of the songs and sounds natural and (dare I say it) organic. It’s a voice that gets under the skin, and even though his inflections make the lyrics hard to understand through an entire song, that’s less important than how it all fits together.

The tracks are mostly mid-tempo and guitar-based, not unlike Real Estate’s brand of smooth upbeat and casual rock/pop. This album does away with much of the electronics which have (so I’ve read) been part of The Sea and Cake’s previous work. It’s a warm, almost woodsy vibe here, though calling the whole thing folk or even folk rock would be inaccurate as there’s enough rock in songs like “Cover the Mountain” and “Starling” and enough jazz in “Occurs” and “Into the Rain” to set it apart. Jazz-touched instrumental “Paper Window” is an unneeded 7th inning stretch, which to my ears is the only misstep (though a small one), the window in question a little too diaphanous for its own good.

The title song and “These Falling Arms” shine the brightest on Any Day, but the rest of the album is a grower, revealing more with each listen. Yes, I’ll have my cake and eat it in the sea.

(Lead singer Sam Prekop is also a photographer who took the photos on Any Day. Here’s a short YouTube mini-doc on his “photo process”.)