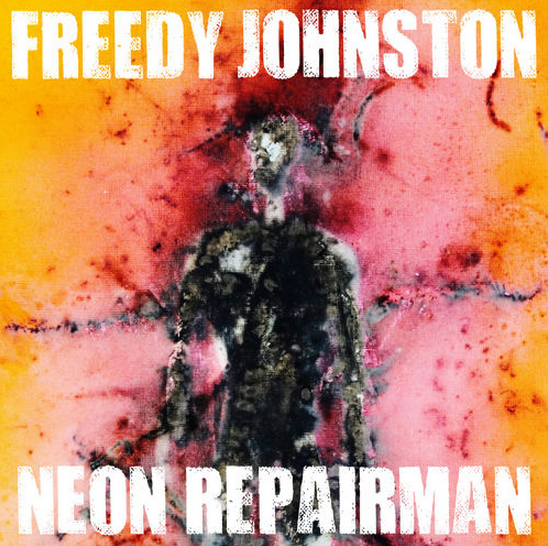 On the surface, it’s a simple song – mainly voice and acoustic guitar, straight-forward lyrics. But Freedy Johnston’s “Neon Repairman” has more going on than first meets the ear.

The track comes from Johnston’s 2015 album of the same name, far into a recording career which found him lauded by Rolling Stone as 1994’s “songwriter of the year”. Though his notoriety may have dipped some since then, his proficiency at song writing has only grown.

“Neon Repairman” draws inspiration from Jimmy Webb’s 1968 classic “Wichita Lineman” (made popular by Glen Campbell), a character sketch of a telephone line repairman who symbolizes the everyman. Even though the lineman of the song is relatively anonymous in society, and often overlooked, he has as rich an interior life as anyone else. There’s an irony in the telephone line repairman fixing a communication device, while he’s isolated out on the prairies, in the elements, alone and not communicating with anyone.

By making the protagonist of his song a repairman of neon signs, Johnston adds a different twist. The neon repairman is fixing something that symbolizes showiness and glitz. But he’s none of those things; he doesn’t stand out, he’s not “neon”. Rather, he’s behind the scenes, keeping the party going, but not part of the party. An outsider. And being an outsider can be lonely. Who takes care of him, who repairs his neon, keeps it glowing?

He knows the social spots, knows them well from memory: the Horseshoe Bar, the Coffee Cup Diner, the Palm Motel. He knows them well, but not as a habitue inside with the regulars, with the couples and the families. He knows them only as an observer, repairing their flickering neon signs. When he sings “I see you everywhere in the neon glow”, he could be referring to a specific person – an object of desire. Just as well, he could mean humanity in general: the people he sees having fun, talking, having dinner together and going about their lives, flowing past and around him. “I need you more than want you, as the story goes” is a direct nod to the lyrics of “Wichita Lineman”, and he’s admitting that he knows he needs human connection. He doesn’t necessarily want it though.

The heaviness is lightened musically by the presence of a chiming, bright bouzouki, which adds another layer of poignancy when intertwined with the deeper toned acoustic guitar. The blue days and black nights (as an earlier album of Johnston’s was called) of the neon repairman have a grittiness, an urban quality which suggests a blues or jazz treatment. You almost expect a dusky sax solo, but we get a stark, moving, country-accented clean electric guitar solo instead.

“Darkness is my friend” Johnston declares, and that high lonesome sound in the way he sings “I am a neon repairman” is defiant. Yet, it’s also a cry in the wilderness, tinged with no little amount of despair.