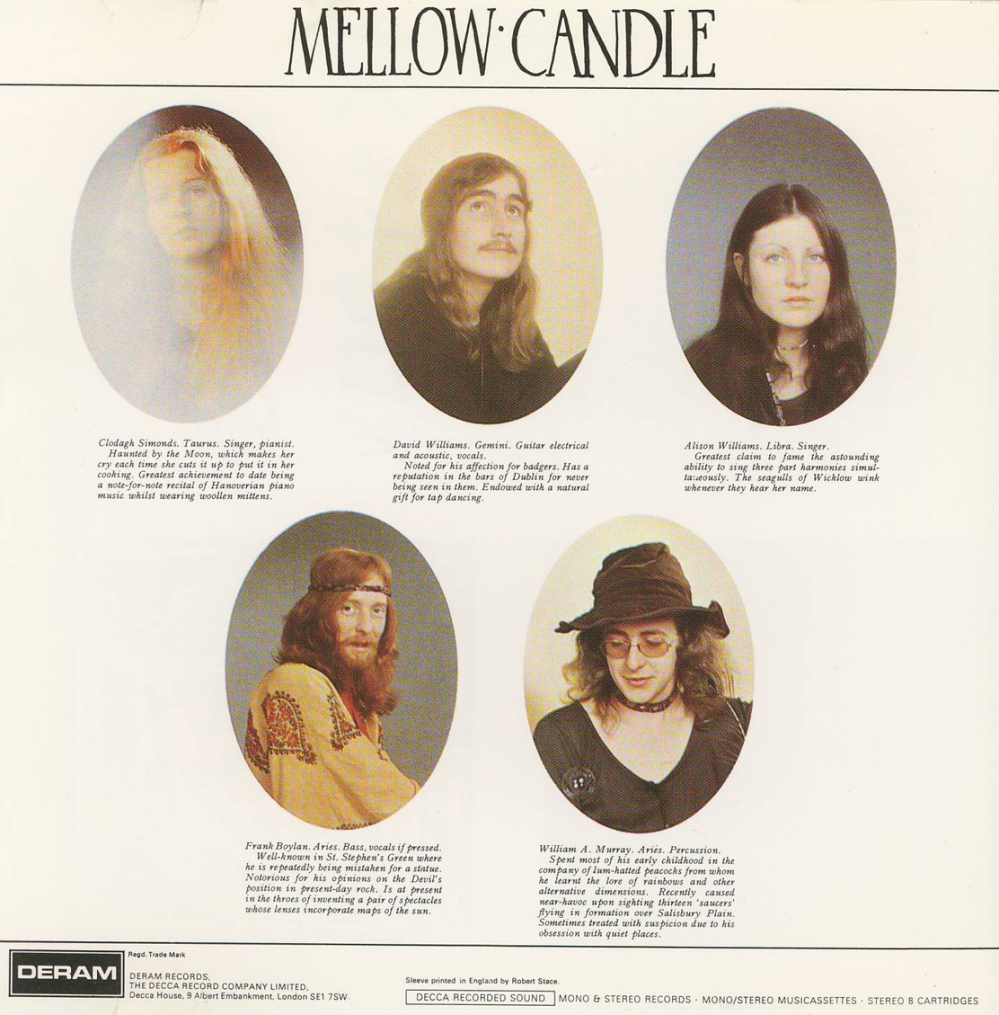 Sometimes the back cover or inside artwork of an album is just as good, or better, than the image chosen for the front cover to sell the music.  Case in point – the spectacular hippie-ness of the above, from Mellow Candle’s Swaddling Songs (1972). No, those images are not supposed be parodies (even the headband guy is authentic)  – them’s was the times, and this here’s a genuine hippie artifact in all it’s glory.  The text makes for entertaining reading, as well (you’ll have to click on the image to enlarge it).  This was a band with a sense of humor, as well as formidable music chops.

If you haven’t heard of Mellow Candle, I encourage you to boogie over to YouTube and have a listen.  Sort of a Heart for the psychedelic folk set, at least in band makeup, the Irish quintet Mellow Candle was fronted by two talented singer/songwriters: Clodagh Simonds and Alison Williams (now Alison O’Donnell). Remarkably, both were still in their teens when this, the sole album from the band, was recorded. Swaddling Songs didn’t make much of an impact when it came out, falling victim to lack of promotion, and not fitting neatly into a particular musical category. It also didn’t help that they shared a manager with Thin Lizzy just when Lizzy was taking off, siphoning most of his attention away from Candle.  Over time the album gained notoriety, because the music really is fantastic in places and Simmonds’ and Williams’ voices blend like, well, like clear sunlight on emerald green fields (or something like that). 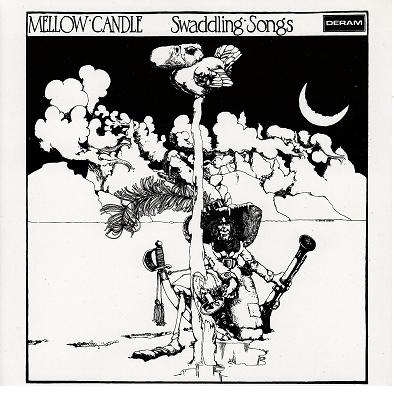 And how ’bout that front cover, though? Drawn by David Anstey, it doesn’t really (to my eyes and ears) look like the music sounds.  Anstey was a busy record cover illustrator at the time, most known now for his cover art for The Moody Blues’ Days of Future Passed.  The image on Swaddling Songs is, best I can tell, some bloke with a gun and a cutlass, seemingly on some fantastic adventure. He’s in an open snowy landscape, which looks like a frozen lake due to the small pool of water at his feet.  He’s holding a (mellow?) candle against a tall spire made of an unidentifiable material, probably ice, melting it. There’s a fat, goofy-looking bird on top who will soon fall to earth (if, indeed, they are on earth in the first place)…unless it flies away.  I’d be remiss in not calling attention to the rather large feather in our hero’s hat.

What does this cover image have to do with anything in the music? Nothing. I mean, I like the image on it’s own, but it looks like it should be on the cover of a fantasy novel. Or a Hawkwind album.  A bit too many mind-altering substances being consumed all around, I’d venture to guess…which is all well and good, I suppose. I’m not complaining about the cover, just trying to piece things together.

Original copies of this record go for well over $1000 these days, a price these young hippies probably never would have conceived of in their wildest dreams back in 1972.

“The seagulls of Wicklow wink whenever they hear her name”, says the album cover text for Alison Williams.